Vivid has gone under so many changes that it makes me dizzy. Around February of 2016 was when both the art and game play would change for the better. At least a little. For the first couple of months Vivid was very tiny, and it was off-putting. I don’t recall why I didn’t make the changes immediately but I would end up making Vivid’s sprite bigger over time.

The art direction was becoming a mix of Kirby’s Dreamland 3 and Paper Mario. What to draw and make levels based on was more challenging. I had no plans on making a complex story, just wanted a simple game where you went from point A to point B. So the worlds were going to be your standard Grass World, Water World, etc.

As I continued renewing the physics and experimenting with mechanics I began thinking about how to approach art. At one point it was going to all be paper. There would be levels that were literally taped or stapled together. I tried color crayons scribbled on paper, colored construction paper, paints. It was very messy and remade over and over again.

The most interesting take happened at the end of 2016 where I did an entirely new approach. Instead of using tiles that were placed accordingly, I’d make entire backgrounds that were made specifically for a level. It was very exciting to do and made the game stand out.

(Levels were a single background instead of tiles)

However there came many problems, some of which had I been more knowledgeable at the time and risky I could have approached differently. For one, all these backgrounds made for just a few levels weighed down on memory, causing the game to take longer and longer to load when I had to process it. I assumed it was because my laptop wasn’t powerful but later on I’d learn Game Maker: Studio naturally did this.

I was also cautious when it came to optimization, and still am. Many programmers say not to worry too much and put in what you want. Optimize later. It’s not so much I worry as it’s that I want to consider those with lower spec computers. I want my games to be available to as many people as possible. That’s why when I began understanding how graphics were done I was very nervous about doing this art method for an entire game.

But the absolute biggest reason was because it was exhausting to make them. It took weeks of dedication to make just a few. Each one progressively wore me out and I felt they got lower in quality as it went on. I imagine if I had a more solid plan it wouldn’t have tired me as much. It was a good lesson.

The final reason was simply due to the fact I limited the levels so they all had certain dimensions. Some levels were a single screen. Others were two screen lengths. Some were two wide and three tall. I was trying to space them to fit on Texture Pages, which for the non-programmers is where all the images are stored and drawn from. Sometimes you need multiple pages to draw stuff and using multiple ones is expensive. So having a game with entire levels made of multiple backgrounds gets a little frantic.

Ultimately I went away from this method and back to tiles. But if I were able to do a better job at managing in the future perhaps this style could be tried again. I am hoping to utilize it to some degree in the final product.

(New tile designs with tilted view to give depth)

Instead I went with a more Kirby Super Star Style design. Now instead of looking flat, everything was made to look like it was drawn from a tilted angle. The floor could be seen giving a 3D effect while 2D. It is this look that Vivid has stayed with thus far.

Mechanically the game evolved to be faster. The previous design was large levels to explore and collect. This new one had shorter levels with a speed running mentality. You were on a very generous time limit to quickly go through a linear level. Collecting stars, defeating enemies, finding the fastest route for the best rank. The game took huge cues from Super Meat Boy and Kirby’s Return to Dreamland Challenge Rooms. 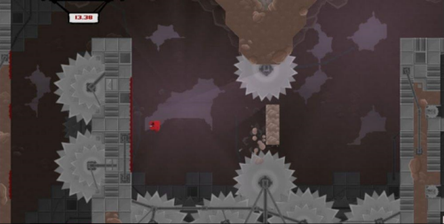 This design overall felt right. I had various friends try it out and it worked extremely well. Vivid has retained many of these ideas.

However the big problem was theme and story. Levels could be anything and for all you knew you’d end up in a clock tower after leaving a canyon. And the story didn’t have room to grow or develop in short stages which made it less interesting. It definitely could have worked fine as it was. After all I wanted a simple story with point A to point B design. But the more I thought about it, the more I thought about the previous open level design.

Thinking heavily about how to approach story and design, I found a solution. A mix of both. Levels would be made of rooms, which could be straight forward or open or lead to other rooms. This is the mentality the game now uses to shape its levels. Allows for flexibility in design and room for story segments if needed without disturbing the flow of the game.

I’d end up redoing enemies and Vivid in a completely fresh coat of paint several times due to all these changes. That’s something that happens to most people; you have something for a while and feel the need to change it or refurbish.

Besides all the art changes and design alterations the physics didn’t change too much. Only compensating for Vivid’s size. More mechanics would be introduced and tested before becoming core elements of the game. Like the weapon upgrade system.

The absolute biggest and latest change to Vivid’s design was how the Color Block mechanic worked. For over two years you had two buttons that allowed Vivid to swap colors at almost any time. It allowed for a lot of freedom and you could take control of a situation at any moment. Which is why I took it away!

To get into the mechanics of Vivid is something for another Blog. So next time, I’ll begin talking about the design philosophy of Vivid as a whole. It took years to fully realize it and I’m excited to write about it in detail!

Posted on November 13, 2017, in Uncategorized. Bookmark the permalink. Leave a comment.